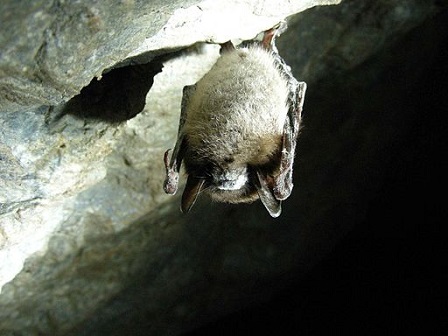 The objective of the Bat Monitoring project is to determine if there are surviving populations of  bats in the Cheneaux area and what species compose the populations.  The intent is to forward this information to the Michigan Department of Natural Resources and universities interested in bat population monitoring. The purpose is to generate interest in professional investigations, i.e., is there a White Nose immune bat population or a winter habitat that is so far untouched in the Les Cheneaux area?  The second part of the project is to monitor trends in bat activity in an attempt to determine if activity is increasing, declining, or remaining relatively constant.  The third part is to increase public awareness of the importance of bats and the effect of White Nose Syndrome (WNS).

The Watershed Council has two on-going projects in Cedarville Bay to address the continuing threat of the invasive Eurasian watermilfoil (Myriophyllum spicatum). In the spring of 2007, aquatic weevils (Euhrychiopsis lecontei) were planted in the Bay as a biological control agent against the milfoil. Since the introduction of the weevil, the Council has been monitoring the density of the milfoil and condition of the test areas. In January 2010, the Council released a study of the success of the weevil project. Click here to review the study. 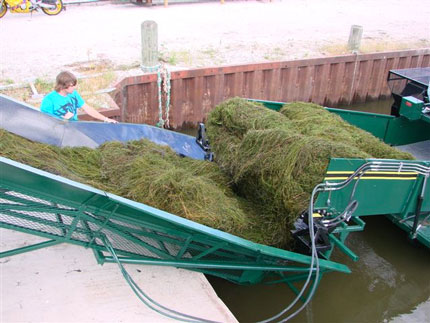 While the weevils have been busy munching the milfoil, the Council contracted with Flotation Docking to remove the milfoil from the boat launch area and the town dock with the help of a mechanical weed harvester. Other areas included east of Cedarville Marine and in front of the Boat School. Approximately 700 cubic yards of weeds were removed from the Bay during the first season of use to make boating assess easier and more enjoyable.

The Les Cheneaux Watershed Council is participating in the effort to identify and remove invasive plant species that have entered our area. For several years we have been working to control the Eurasion watermilfoil plants in Cedarville Bay. We are stepping up our efforts to identify, map and remove other invaders such as Phragmites, Narrow-leaf Cattail and Purple Loosestrife.

We've added another page to our web site to provide information to our full time and seasonal landowners about helping us locate and remove these plants. We invite you to get involved in the effort. Click here to learn more.

Summer time in the Les Cheneaux Islands is a fresh and magical time in our pristine forests and sparkling waters of our 36-island archipelago, teeming with new life after the long winter. The season is marked by a symphony of frog and toad calls which gave birth to Frogfest in the year of 2000. Come join us in celebrating earth stewardship in the Les Cheneaux Islands while learning more about the wetlands and marshes that amphibians call home.

The Watershed Council is pleased to report that Dennis A. Albert will be returning to the Les Cheneaux area to study the growth of invasive cattail in Cedarville Bay near the Pearson Creek outflow. Mr. Albert will team up with a group of Oregon State and University of Michigan professors in the study effort.

Since 2008, the Les Cheneaux Wateshed Council has facilitated removal thousands of pounds of hazardous materials from our watershed. We've collected everything from paints and oils to batteries and pesticides. These pollutants are truly considered non-point sources as they were collected from across the watershed. Collection has been funded through grants and donations from the Community Foundation. Collection dates are posted on the web site calendar.

The Les Cheneaux Watershed Project has been able to coordinate with Les Cheneaux Community Schools on several long term projects that have been very successful. Two primary goals were achieved with the implementation of these projects: 1. A large number of High School students were able to learn about our watershed and its resources while taking part in scientific investigations. 2. Water quality data has been generated and recorded beginning as early as 1993. This long term data is extremely valuable in the understanding of water quality trends.

Click here to check out the outstanding work performed by our youngest stewards of the Les Cheneaux watershed.