The Les Cheneaux Watershed Council is participating in the effort to identify and remove invasive plant species that have entered our area. For several years we have been working to control the Eurasion Watermilfoil plants in Cedarville Bay. We are stepping up our efforts to identify, map and remove other invaders such as phragmites, narrow-leaf cattail and purple loosestrife.

During the summer and fall of 2010, Les Cheneaux Watershed Council and volunteer team members performed an inventory of the invasive plant Phragmites in the Islands area.

The Les Cheneaux Watershed Council is a partner in the Eastern Upper Peninsula Cooperative Weed Management Area (EUP CWMA). The Council will be working with the EUP CWMA to identify locations of the various aquatic and land plants that have invaded our area. Once identified, resoures will be dedicated to remove these plants. Volunteers are needed to help locate and remove invasive plants. 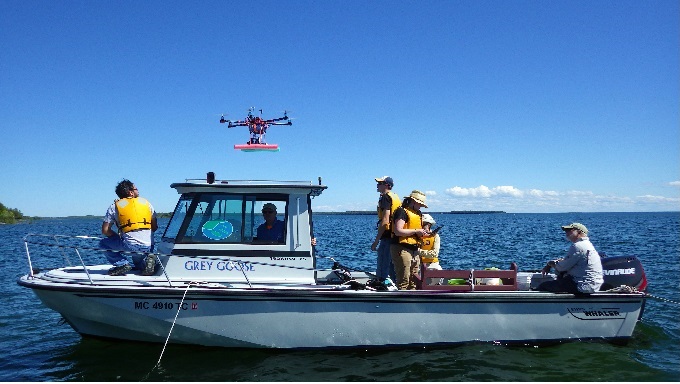 In 2016 The Les Cheneaux Watershed Council partnered with a team of biologists and environmental mapping specialists at Michigan Technological University to test the efficacy of a fungus native to the Great Lakes, Mycoleptodiscus Terrestris, for controlling Eurasian Water Milfoil (EWM) growth without the need for chemical herbicides.

LCWC has develop a naturally occurring fungus for managing growth of the invasive Eurasian watermilfoil. One treatment will control the milfoil each season. The fungus grows naturally in Les Cheneaux and is safe for humans, fish, birds, invertebrates and swimmers. Thousands of Watershed Council volunteer hours have been spent to develop this effective, safe, biological control during the past six years.

Prior to 2016, the Watershed Council had two on-going projects in Cedarville Bay to address the continuing threat of the invasive Eurasian watermilfoil (Myriophyllum spicatum). The projects were weed harvesting and the use of weevils. In the spring of 2007, aquatic weevils (Euhrychiopsis lecontei) were planted in the Bay as a biological control agent against the milfoil. After the introduction of the weevil, the Council monitored the density of the milfoil and condition of the test areas. In January 2010, the Council released a study of the success of the weevil project. Click here to review the study. 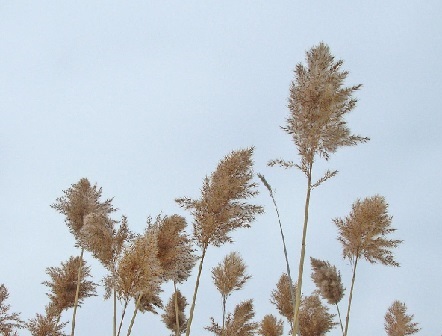 Phragmites in the Les Chenueax Area Phragmites australis has invaded Les Cheneaux. The invasive phragmites (frag-MY-teez), also known as common reed, is a perennial, wetland grass that can grow to a height of 16 feet. P. australis is native to Michigan but an invasive cultural variant is becoming widespread and is threatening the ecological health of wetlands and coastal shorelines of the Great Lakes. The native, invasive and hybrid forms of these have been sighted in our area during the past two seasons.

Phragmites is controllable. For those wishing to learn more, log on to www.michigan.gov/deq. Enter “phragmites” in the search box in the upper right corner of the home page.

Volunteers are asked to provide basic information about the invasive plant and its location. A common form is being used throughout the midwest to provide the necessary information to map the locations of the various species.

If you suspect that one of the listed invasive plants has found a home near you, you can contact, EUP CWMA Program Coordinator. If you report the information on an "Invasive Species Reporting Form", you can mail the form to:

"A Guide to the Control and Management of Invasive Phragmites"; Michigan Department of Natural Resources and Environment; Ducks Unlimited; US Fish and Wildlife Service; US Army Corps of Engineers; MDOT; Aquatic Ecosystem Restoration Foundation; 2007.

A Field Guide to Invasive Plants of Aquatic and Wetland Habitats for Michigan; Prepared by the Michigan Department of Natural Resources and Environment and the Michigan State University Extension; 2010