Watershed Projects With The 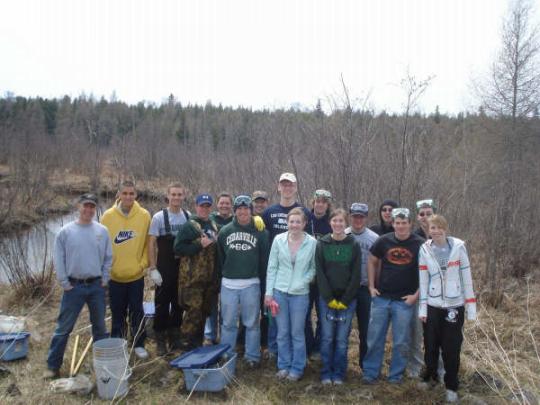 Yearly monitoring of Pearson Creek and Beavertail Creek has been completed annually every May since 1994 as a part of the water quality unit in the high school science curriculum. This project has been invaluable as a teaching tool but has also provided baseline water quality for area surface water for the past ten years. Test parameters have included the following parameters:

This project has given valuable insight into the water quality of our area. Beavertail Creek is a creek that is more remote, and has had a minimal amount of human influence when compared to Pearson Creek which runs through the town of Cedarville and empties into Cedarville Bay. Pearson Creek also receives treated sewage effluent from the local treatment facility in the spring and fall.

For 2009 sampling photos and an overview of water quality through the years, click on the following link: 2009 Water Quality Page

The IBI survey was first completed in the fall of 2000. This study was initiated by Michigan State and Ferris State University graduate programs for the Les Cheneaux area. Cedarville High School then coordinated with the two universities to begin yearly monitoring for high school biology classes. Cedarville biology classes have conducted yearly monitoring of Prentiss Bay and would like to continue this project in the future.

3. Monitoring of Macro-invertebrates in Mackinac Creek.

Beginning in March of 2001, we began an invertebrate monitoring program in Mackinac Creek. This study concerns benthic invertebrates and is an expanded version of the method that we use in our general water quality monitoring of Pearson and Scotties Creeks.

Every spring since 1999, Cedarville's science classes have completed perch skein surveys in Flower Bay. This project was originally set up by the US Geological Survey, and involved several marshes in the Les Cheneaux area. Cedarville High has taken responsibility to conduct surveys at Flower Bay each spring and would like to continue to do so in the future. Through prior grants, Cedarville High has had the opportunity to integrate this project with the use of GPS units. This has made for a quality learning experience for students, as well as a great tool in the investigation of perch spawning activity in Flower Bay.

These projects have provided a multitude of learning opportunities for students in the Les Cheneaux area, as well as serving as a source of data and information that can be used in the decisions that will affect our areas resources and development. The Les Cheneaux Watershed Project has been an instrumental resource in the carrying out of the projects described above. Les Cheneaux Schools and the Watershed Project will continue to work together in the future to expand the educational opportunities for our area residents, while promoting and carrying out the conservation of our natural resources.